It’s always exciting traveling to the City of Sin! Although this year I had mixed emotions about the race. All I could remember was the unbearable heat and dying on the run two years ago, in addition to getting kicked in the teeth on the swim by some fast swimmers who qualify for this race. We had also stayed on the Strip then, making sure the vacation would be enjoyable for athletes and support crew alike. That just meant some incredible temptation and possibly irreparable damage before the big day. One night I had to send my boyfriend and best friend to go out on their own to get the prescribed sleep, although I really wanted to be out with them!

I knew I would not be staying on the Strip this time. As I had qualified for this race more than a year ago at Timberman, I had almost forgotten about it, making Kona preparations more my focus. A few months before the race I started to panick a bit, knowing that Lake Las Vegas hotels were probably sold out already, and I had no one to accompany with me. As the race is right after Labor Day and cuts into Burning Man, most people have other plans and would not consider going to cheer for a triathlon race instead. Missing out on all this type of activity right in the Nevada desert made me a bit sad as well.
I then got the idea to try my luck with Love Home Swap, a site where you can exchange your apartment with someone else and experience a vacation the local way. I had successfully exchanged my New York home for a chalet in a ski resort in Chamonix a couple of years ago and it worked great. To my surprise there was a vacation home listed right on Lake Las Vegas and we had agreed to a non-simultaneous exchange. 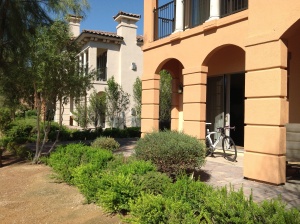 Over a couple of cocktails one Friday night I convinced my girlfriends Robin and Rachel to come to Vegas as well and now I had support crew as well! Plus, a bunch of my Zoot teammates, including Kendra would be there as well. I found out right before the race that Kendra would not be able to run due to a stress fracture in her foot. She had the best attitude about it but I knew it must be heart breaking for her not to be able to compete in a big race like this toward the end of the season. That was an attitude changer for me as well. I should feel so lucky to be healthy and have the opportunity to compete against the best in this sport, have support crew and be part of an awesome team. Lets get excited about this race!
I arrived at my new host home rather late. It was beautiful but rather hot. I figured the AC must be turned off. I looked at the thermostat and it showed 85 degrees as well as a malfunction message. I tried to play with the control buttons they were inside a plastic box that was locked. Alright, the fan was working in bedroom, let me shower and try to sleep and figure this out tomorrow.
I managed to stay in bed for 8 hours, waking up a few times given the heat and time zone difference. The next day involved putting my bike together, going for a training ride and trying to figure out the AC malfunction with the pair team. The verdict was no good. An expensive part was broken, it had to be ordered and would only arrive on Tuesday. You are kidding right? I had to decide if to get a hotel instead as my friends Rachel and Robin were on their way from New York. We decided to stay, although I think they regretted this decision once they actually arrived and lived the heat on their skin.
It seems that something unexpected tends to always happen to me before a race. Getting stung by a bee in my foot the night before my first Ironman race is the perfect example. How you handle the situation then (keep it together mentally) is what counts. This would be just like my childhood summer experience growing up in Eastern Europe when we had no AC i tried to tell myself. Except that this is Vegas, race in a day and a half, and frankly not the best time for resilience training…
So the night before the race I took a cold shower, wet my hair and put ice wrapped in a wet towel on my neck and thighs and drank ice water (which melted quickly into regular water). I woke up at night, took another cold shower and tried to pretend like this was normal. About an hour before the alarm went off the temperature seems to have dropped (or maybe I was dreaming it) and my sleep was a bit more restful.
Sure enough, the drop in temperature seems to have been real as Rachel announced it was raining when we all started to get up, bright and early at 4am. This was against all forecast predictions. Could we not have had this the last couple of days? This is good I thought, I would take rain over heat any time. Although the slippery roads would be a danger zone.

Swim
The rain was not stopping before the swim start, the transition was getting muddy and I started shivering, as did other athletes. At that time my coach arrived and offered me his jacket. That was perfect. I stopped shivering, we wished each other good luck and I went into my corral. I saw Kendra in her matching Zoot swim skin, always putting a smile on my face. As the gun went off Kendra and I kept bumping into each other.  We started to the left, aiming more directly at the turnaround buoy but no one to draft off. My intention was to go faster on the way back. On the way back I found myself behind a pack of girls and decided to draft off them. Since I felt I was not going faster that way, I tried to break off but was not getting away from them. So I got back into the  draft. I finished the swim in 35, fairly standard for me for a non-wetsuit swim, but no blistering speed or improvement.

Bike
I love this hilly bike course in the desert! Although the slippery road and many athletes deciding to stay in the middle of the road so that you had to yell at them to let them know you were trying to pass made me extra cautious. I kept thinking about getting to Kona in one piece. And it was probably the smart thing to do. Two friends had crashes with other cyclists early in their races. I passed a few girls in my age group and also got passed. I tried to keep them in sight but as some were in packs of cyclists which was both dangerous and not race legal, I decided not to stay with them. With 15 miles to go, I realized that my left elbow was uncomfortable. I looked at it and realized I had lost the pad of the arrow bar and was thus resting directly on metal. It made me want to get out of the arrow position but knowing it was faster to keep arrow, I forced my elbow onto the metal with screws. 5 miles or so to go I passed one competitor that I was keeping in sight, who had passed me earlier, and started to look forward to the run.

Run
I did not want to go out too fast but wanted to keep a somewhat constant pace, possibly negative splitting. Right in the beginning Rebecca Travis, a competitor who beat me in Oceanside but who I beat at Rev 3 Quassy, passed me on the first mile. I kept my pace and passed her back within the next mile. Just be patient I thought to myself. At this point it had stopped raining and it was rather steamy. I started to feel a little light headed. What is going on, I thought? I did eat and drink on the bike, though mostly water. I only took one electrolyte as it did not seem that hot with the rain, but that was probably a mistake. At the next aid station, I need to swallow an electrolyte I thought. I did and felt better immediately. I took my favorite 2 nd Surge energy gel. As I went to take a third one towards the end of the run, I realized it had fallen out of my race belt. Bummer. I will have to take one from the course. I kept missing it in the aid stations that I just decided to get by on Perform and Coke. That has calories too. I loved having Robin and Rachel cheering on the run. I asked them to tell me what position I was in and they said 14th off the bike. Ok, game on, maybe I can still make top 10. Just keep the pace or go faster. On the third loop Kendra told me I had a cluster of girls just a minute ahead, which was motivating but very hard to go any faster. I kept motivating myself by the night out we would have on the Strip when I finish. The faster I finish, the earlier we can go! I tried to smile at the volunteers. They were great and there was plenty of music to get pumped up by. I tried to push on the last uphill. So close  and only a downhill to the finish line. I looked at my Garmin to remind myself how close I was. I really let gravity take control as I flew down the last down hill and finished with a smile on my face. I saw Sonja, a competitor I have yet to beat in the finish line. We took a finisher photo together and I went on to rest in the recovery area. Kendra found me and we learned I came in 9th. Ok, better than 2 years ago when I came in 12th. Progress.
The rest of the day was amazing. I chatted with Andy Potts in the bike pick up area, who would be heading to Kona the following week. He was hoping to win that day and came in 4th. Although he is almost always first out of the water, two ITU athletes came out in front of him this time.  We left our steamy home on Lake Las Vegas and headed to a hotel, Vdra, on the Strip. We put our hoochie mama dresses on and went to celebrate Vegas style.

One comment on “Las Vegas Half Ironman World Championship 2013”

This entry was posted on October 7, 2013 by ultrahana in Race Report.